Return to the Marsh 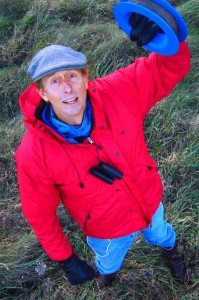 I could see that the lens was still extended... I was the happy owner of 483 new aerial photos of Otter View Park. November 18, 2011

This time it was the dry umbels of Queen Anne’s lace that I was tossing into the air as I crossed the field.  WeatherUnderground.com was reporting only 4-7 mph winds at the golf course, but WeatherSpark.com was predicting 10 mph winds from the west which could easily loft the camera over the marsh.  This was the first sunny day in a month with a prediction of steady west winds, and it might be my last chance for above freezing weather and a shot at getting aerial photos of the entire cattail marsh at Otter View Park.  So I was disappointed with the plummeting umbels, and soon out of breath from running upwind just to watch the Levitation Delta crash in the grass.  On the second try, I ran 100 yards and got it just high enough to find a wind.

That limp wind was not from the west, so the kite was not flying toward the marsh, but I tried to ignore that as I assembled a minimal KAP rig with my lightest and cheapest camera.  Ten minutes later I was attaching the picavet to the line when the kite started pulling harder and veered to the east over the cattails.  Impressed and pleased with WeatherSpark’s predictive prowess, I let the new wind pull the rig over the marsh and all the way to Otter Creek.   The Canon Powershot SD1100 was snapping photos every 10 seconds, and I started crisscrossing the field, pausing for a minute every 50 feet to settle the rig for a few shots.   More than an hour later I brought it down and there were 432 new photos on the card.

It was only 1:00 PM, and the west wind was holding, so with the kite still aloft I put my best KAP camera on the rig.  The Canon S95 has a larger sensor and better lens, and I could not resist the opportunity for a substantial (20%?) improvement in image quality.   The controls on the S95 are also smarter, so when I noticed some clouds moving in, it was easy to crank the ISO to 200 and turn off exposure compensation (my default for sun is -2/3 stops).  I soon had 1000 feet of line out again, although this time the marsh was not in the sun.  Even with shutter priority at 1/800 of a second, there was still plenty of light for good exposures, so I started crisscrossing again.  Then after one transit of the field the sun came back out and the sky looked promising, so I retraced my steps in hopes of covering the entire park with sunny shots.  I had to wait out a few passing clouds, and was delighted when I pulled it in after 1.5 hours and I could finally see that the lens was still extended — the camera was still capturing.  Indeed, I was the happy owner of 483 new vertical 10 MP photos of the mostly sunny Otter View Park.
.
Embedding code from gigapan.com (for some reason the snapshots are not displaying and the mouse wheel scroll is broken):

.
Embedding code from Ron Schott (for some reason this is dark):

The happy part did not last long.  A quick glance at the LCD revealed that the focus distance was set for 15 feet.  I still don’t know when it got changed, only that it was set for infinity when I checked it a few minutes before launch.  I assumed that this mistake would make the second set of photos worthless, and it’s good that no one could hear what I was saying in the center of that field.  I packed up and took a contemplative walk to the river along the boardwalk before driving home.

It took several hours before I felt up to looking at the photos, but I was surprised when I did; I could not tell for sure that they were out of focus.  Images taken at f/3 by a camera dangling from a kite 500 feet above the subject are never going to have crisp detail.  I still don’t know whether focus was set to 15 feet for the entire flight, or maybe got reset during the landing. The EXIF data do not seem to include focus distance, so maybe I will never know.  Maybe there is not very much difference between 15 feet and infinity with that lens.

After an hour of sorting through the photos, I was able to get 23 of them to stitch together in Microsoft ICE and make a continuous image of most of the park.  This surprised me, because stitching is easiest when the camera stays in the same location and rotates, and each of these photos had been taken from a different place.  I tried ICE’s rotating mode and its three planar modes, and “Planar 2” worked really well.  That was good news because it meant I might be able to produce a seamless orthophoto of the entire park.  I output the result to jpeg and opened it in Photoshop to manually add parts of 11 other photos around the edges to extend the coverage as much as possible.  A jpeg of the final composite was overlain on a satellite view of the area and registered with Photoshop’s warp tool.

A poster of the image is at gigapan.org and embedded above using code I stole from Ron Schott’s site (I couldn’t modify the Gigapan.org code to increase the height of the viewer).  I used a lower resolution jpeg as an image overlay in Google Earth. This is embedded below using Google Earth’s embed KML gadget and it includes the park boundary and some of Galen’s preliminary results from his community service project. [Update 12/2012: The photo popups are currently too small for the photos]

I also aligned 15 photos at MapKnitter.org which are embedded below.  These photos are georeferenced pretty well, but are not blended together.  There seems to be a default way in which the photos are shingled, so there is poor control over the appearance of the final image. But Mapknitter is a very handy and free tool for doing this task online.
.

It took me five days to finish this post because the weather has been good for rototilling and splitting wood, and because the motherboard on my four-year-old desktop blinked out two weeks ago and I am waiting to get the new HP Pavilion set up. So all the stitching, etc., was done on a laptop that is riddled with recalcitrant malware and is useable only with multiple daily security scans and unplanned hard reboots. It’s going to be a pleasure to use the new machine to process the photos from my next KAP flight.

2 comments for “Return to the Marsh”