The final flight of the Fled 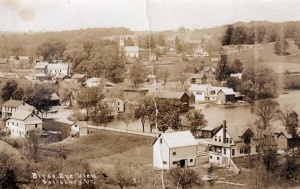 A postcard from ca. 1900 with a view of the village of Salisbury

Around the turn of the 20th century, a postcard was made with a view of the village of Salisbury, Vermont from a field on the side of a hill. Repeating this photo would highlight the dramatic changes since then, such as the draining of “Mirror Lake,” and the rampant increase in shade trees in the village. But trees also cover the hillside now, so it is not possible to reoccupy the original camera location. I have had this project in mind as I practiced kite photography, wondering how I could fly a camera over the trees close to the proper place. When Friday afternoon arrived sunny and breezy, I hopped in the truck and headed to Farwell Lookoff, the site of an old cabin at the top of that same (now forested) hill. I had been there only once before, and did not remember whether the cabin occupied a large enough clearing from which to launch a kite. The jury is still out on whether it does.
.
The 10 minute walk up the gated driveway revealed a clearing of about an acre on the side of the hill. It was steep, and the wind was not strong there, so I continued to the top where ca. 8 mph gusts were crossing the level cabin site in a smaller but connected clearing about 50 feet by 100 feet. I could not launch the Flow Form 16, but the Fled took only six tries to get above the trees. I let out about 400 feet of line to get above the forest boundary-layer turbulence, and it flew steadily at a high angle. So after a few minutes I walked it over to retrieve my pack and then headed down to the bigger clearing to get the KAP rig set up. I had not left the small clearing when a gust from a new direction pushed the Fled into a power dive. I had seen the Fled do this only a few times before, and the kite had always pulled out of it quickly. But this time there was less room above the forest and the dive was sustained at about a 45° angle. The dive began to level out before the kite disappeared behind a white pine tree, and the Fled continued to pull for 5-10 more seconds. I thought it might appear again, but the line went limp.

It took about 45 minutes to find the kite. I was pleased to learn that the forest there is very mature and healthy, but that means the trees are very tall. There were few gaps in the canopy so I only got one glimpse of the suspended kite line, and it was just luck that I managed to spot the Fled at the top of a very tall sugar maple about 300 feet from the clearing. There are no branches on the main trunk for about 60 feet. I am not worried that someone is going to steal my Fled.

I went back to the clearing, cut the line, and headed down the hill. I was crushed at this loss, and decided the best medicine was to try again. I now had only the Flow Form, which requires a good breeze, so I headed to a much less challenging site — a big hayfield at the top of a hill. The local elementary school has its soccer field in just such a place. The surrounding scene is far less interesting than the Farwell Lookoff, but I had already faced enough challenge for the day.

The conditions were perfect for making a half spherical panorama from above the school. The sky was clear and the wind was very steady at about 10 mph. The AuRiCo tripped the shutter of the Powershot A590 1186 times in 53 minutes it took to fill up the 4 GB SD card. I walked to three different locations in the hayfield, but I stitched images from only one location where it seemed the kite had been most steady for a while. Every 6.3 minutes, the autoKAP rig makes a 360° rotation and takes two photos at each of 76 positions (19 pan times 4 tilt). Sometimes it only takes one photo, and rarely it fails to take any, which has terminal consequences for panorama stitching. I don’t know why the shutter triggering is that unpredictable, but with eight complete rotations, I had lots of photos to chose from.

I am still confused by another feature of the AuRiCo controller. It moves the camera among four tilt positions at each pan position. The goal is to get complete coverage of the scene below. But the four tilt positions do not differ by the same angular increment. The standard AuRiCo tilts down 15° from the upper position, then 30°, then 25° to the fourth and final position. The AuRiCo version I have tilts 22.5°, then another 22.5°, then 45° to the fourth position. I cannot think of a reason that the increment should not be constant. But the 45° move to the lowermost position is the real problem. The widest focal length on my Powershots is 35mm which has vertical angular coverage of about 38°. That means even at the widest zoom setting, my Powershots leave a 7° gap between the photos from the third and fourth tilt positions. It is only because 1) two photos are shot at each (most) of the positions, and 2) the swaying of the Picavet suspension adds some error to the pointing, that I have been able to find photos that fill the gap for each of the pan positions. Why aren’t the tilt increments determined by the AuRiCo constant?

Maybe I will figure this out (and improve my kite flying fundamentals) before I try to repeat that photo again.

2 comments for “The final flight of the Fled”