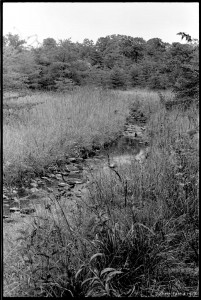 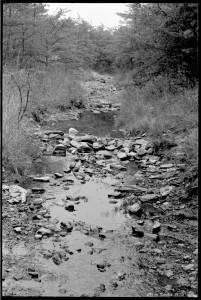 I assume they are still like that. Soldiers Delight is a local high spot, and the radiating watersheds include mostly undeveloped serpentine. I think serpentine weathers differently from other rocks, and may form less clay and silt. There is certainly less fine soil on the barren slopes that could wash into the streams, but maybe it already washed away. So I’m not sure why the streams were so clear and mud-free. I assume the stream banks have become less sunny as Virginia pine encroaches, but maybe there has been some tree removal to encourage fringed gentians and the streams are still sunny.

Sketch of a water powered buddle for separating lead ore in Shropshire, UK. I don’t know if Soldiers Delight’s buddles were of this type or even if they were powered by water. Source.

Another thing that could have influenced the nature of Soldiers Delight’s streams is buddles. Buddles are ore processing contraptions that work like sluices to wash lighter material away from the heavier metal or ore. The sites of four 19th century buddles in Soldiers Delight are well documented, and we even know the quantity and quality of “chrome sand” some of them produced for certain periods. 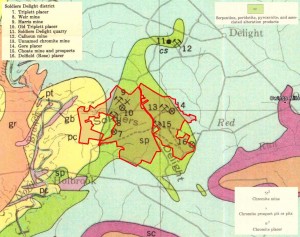 1925 geological map with the boundaries of the Soldiers Delight NEA (red) and the locations of chromite mining operations. The four known buddles (placers) are where streams exit the exposed serpentine bedrock (green). Modified from Pearre and Heyl 1960 (link below).

I have never seen the buddle sites at Soldiers Delight, and I don’t know if anything is still visible. I don’t know it they were round or rectangular. The stream bank sediments were carried to the buddle and dumped at the high spot (which was the center of the round ones) and washed so the waste material went downhill. After the first separation, some of it could be moved to the high place and washed again. 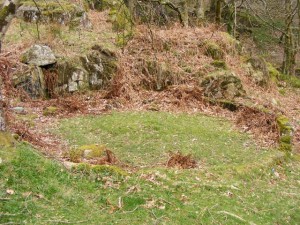 The site of a buddle from the 18th or 19th century in northern Wales.

Buddle operations in Soldiers Delight began before Issac Tyson’s bedrock chromite mining started in the 1820s, was intermittent throughout the 19th century, and continued until a few years after bedrock mining stopped in 1918. 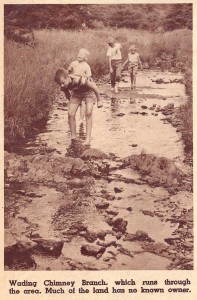 The buddles were built near placer deposits where the chromium rich sands had been deposited along streams. Water was needed for their operation, so they had to be located as far downstream as possible (where the stream had more flow) but without leaving the serpentine outcrop (so the floodplain sediments were not diluted with non-serpentine material). But placer material could be brought to the buddle, and long stretches of streams were probably scraped clean as wagon loads were hauled by horses down to the buddles. I have never heard that dams were built to store water for processing, but it seems likely that this would have happened, especially directly upstream from the buddles. The typical round buddles had a rotating arm which swept the sediments to aid the separation, and this could be powered by a water wheel which would have required a dammed reservoir. 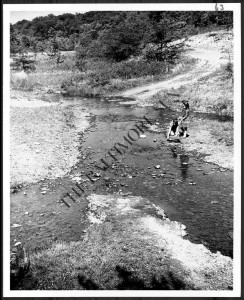 Keith and Robin Brewer at Soldiers Delight. I think this is at “Site 1” along Dolfield Road in a tributary of Red Run. The Dolfield buddle was right downstream from here. Sunpapers photo by William H. Mortimer, May 1964.

So the beautiful, clean streams at Soldiers Delight probably looked the way they did when I was a kid largely because they had been dramatically altered during the previous century. The lack of fine sediments and woody plants may be a direct result of their removal several decades earlier.

Elmer and Jean Worthley taping On Nature’s Trail in Soldiers Delight for the Maryland Center for Public Broadcasting. This was back when you weren’t thrown in jail for picking a fringed gentian. Cameraman is Rus Baker. Sunpapers photo by Ellis J. Malashuk, September 1977.

With that much stream bank disturbance throughout the 19th century, it’s surprising that a fragile plant like the fringed gentian, which is restricted to sunny, grassy, stream banks, would have survived. So it is possible that it did not survive that disturbance because it wasn’t even there then.

Fringed gentians in the grassy bank of a stream. Fall 1973.

It may be that the fringed gentian established at Soldiers Delight only after the mining disturbance stopped in the early 20th century. It might just be another recent invader, albeit a rare and beautiful one. It somehow tolerates the high Mg:Ca ratio in the soil and enjoys freedom from competition from all the plants that can’t. But as succession proceeds, the gentian is being pushed out. It had a good run in the mid 20th century. And so did we. 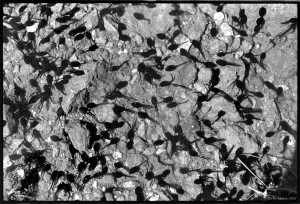 .
Chromite and Other Mineral Deposits in Serpentine Rocks Of the Piedmont Upland Maryland, Pennsylvania And Delaware By NANCY C. PEARRE and ALLEN V. HEYL, JR. 1960
.
Plates from above reference.