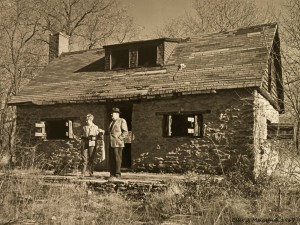 I was really pleased to learn that the archive of my own black and white negatives includes a 1973 photo of Red Dog Lodge. But last week I found a 1967 photo for sale on eBay, and it’s much better than mine. It was taken for an article that ran in the Baltimore Sunday Sun Recreation section (page 11) on December 10, 1967. I inferred that from notes and stamps on the back of the photo, and from a citation of a Paul Wilkes article “Campaign to Save Soldiers Delight” from that date.

I don’t remember seeing this photo or a saved clipping of the article. It seems uncharacteristic for my mother not to have saved a clipping, considering that I still have multiple copies of the entire 1960 Sunday Sun Magazine we were in. But photos of her kids were not in this article, and maybe she fell prey to the common mistake of thinking that the next generation will be more interested in what your kids looked like as kids than what you looked like as a parent. If someone has an Enoch Pratt (Baltimore City) library card, you could search this database and maybe find the article. I would like to see it because it apparently quotes my mother with the rather inflated Soldiers Delight comparison “It doesn’t look like much. But to us it is the same as the Painted Desert or the Petrified Forest or the redwoods,” without the redeeming context that a few years earlier we had driven across the country and visited those places (none of which are in any way the same as Soldiers Delight). 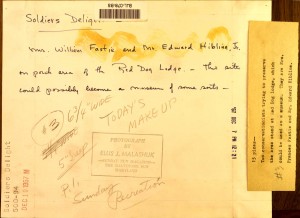 Backside of photo above. The typed caption was glued over the handwritten one.

The typed caption that was glued to the back of the photo (over the handwritten caption) reads: “Two conservationists trying to preserve the area stand at the Red Dog Lodge, which could be used as a museum. They are Mrs. Frances Fastie and Mr. Edward Hibline.”

Ed Hibline used the stone cabin in the 1940s and 1950s before it fell into disrepair. This photo brackets the time of the removal of the dormer which was gone when I took a photo in 1973. So maybe the state bought this land and did a quick fix of the roof before 1973. It would be really cool to find an even earlier photo taken when the front and side porches were still present.

Entire print with crop marks. I don’t know whether “REMAKE” is a label or a command.

I tried to scan the 8″ x 10″ black and white print in my flatbed scanner, but the tonal range was compressed with all the settings I tried. So I used my new Nikon D3100 and just took a photo of the print. The result is much more faithful to the appearance of the original photo, in both resolution and tone. You might have to enlarge the close up crops below to appreciate the difference. The color differences are artificial, haphazard, and irrelevant. I guess it’s a shame that lots of people scan photos at high resolution and assume they have a copy comparable to the original, when in fact much has been lost. 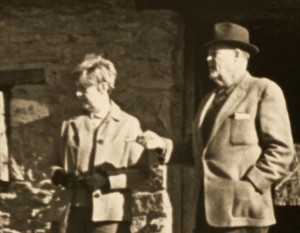 Close up of photo copied with a camera. The color is artificial, but the resolution and tonal range are similar to the print. 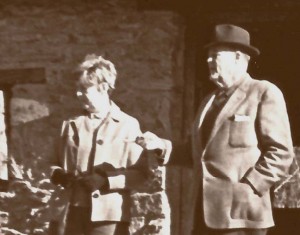 Close up of photo copied with a flatbed scanner. The tones are harsher than in the camera copy.

Ellis J. Malashuk took this photo, and on the same day took a couple of others that were for sale on eBay including the one below of Florence Rogers and her granddaughter Suzanne at the overlook. That one is still for sale. This sale is part of the Tribune Company’s attempt to monetize the photo archives of several of their metropolitan newspapers (more here). 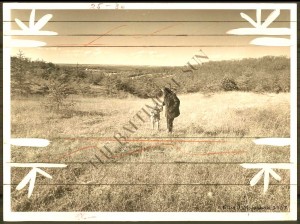 Florence Rogers and her granddaughter pretending to enjoy nature at the Soldiers Delight overlook. This is a good candidate for repeat photography. Photographed on the same day (December 7, 1967) by Ellis J. Malashuk.