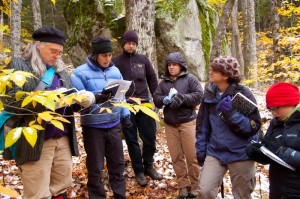 I joined the University of Vermont Field Naturalist and Ecological Planning graduate student field trip yesterday to the 22,768 acre Giant Mountain Wilderness area in the Adirondacks. The trip was led by Alicia Daniels and focused on the plant community response to a dramatic 1963 landslide and outburst flood which deposited a mile-long debris flow in the Roaring Brook valley. The debris flow and successional puzzle were intriguing, but I was stunned by the old forests on the valley sides. There were hemlocks, red spruce, and sugar maples everywhere that appeared to be 300-400 years old. One increment core of a spruce and one cross section of a hemlock across a trail confirmed 350 year-old trees, but it looked like many others were that old. I have never seen such a majestic stand in Vermont.

Before the students arrived I made a gigapan of the view from the top of Roaring Brook Falls. Intermittent sunlight was a challenge, so I shot the 174 image panorama twice. The second try had better lighting, and when I learned today that the device had failed to capture two of the images, I was glad I had the first set for spares. After the class left I made another gigapan inside a hemlock forest on the hillside above the brook. I was hoping the wind would have abated by then, but it hadn’t, and many understory leaves were fluttering. Despite the 1/15 second shutter speed, I am pleased with the result which has a bold glow that my other forest gigapans lack. That may be because there are no 400 year old trees in those others. You can see my GPS track for the day with both gigapans on this KML preview page (Note: If you enter a gigapan, the “Exit Photo” button is partly hidden under the “Terrain” button. Click the exposed edge of it to exit the gigapan). You can also download the kmz file to open in Google Earth. There is some reward associated with viewing either of these gigapans in Google Earth and using the slider in the left panel to increase the transparency of the image.