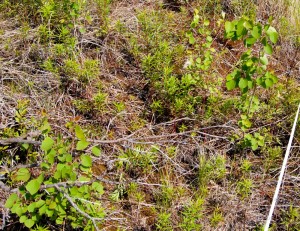 My day at this site was sunny and windy, so while the 100m tape was marking the borders of one of the 20x20m plots, I captured 900 photographs of the area with a little camera hanging from a kite. Half of the photos were taken as the motorized autoKAP rig pointed the camera in 76 different directions covering the entire half-spherical view beneath the rig, with lots of overlap among photos. The camera did several complete rotations as I tried to keep the kite in the same place, and it later took me a few hours to chose 36 photos that stitched together reasonably well in Microsoft ICE. Below is the resulting panorama in Photosynth’s nice spherical viewer.

I exported a jpeg from ICE and used Photoshop to mark the corners or borders of the study plots (they are not marked in the Photosynth version) before uploading it to gigapan. This link uses KML preview to display the curved panorama in Google Earth in a Web browser (double click on the gigapan icon). To open this gigapan in Google Earth, click here to download a kml file. You can also view the panorama flattened at gigapan.org.
.
.

Later I turned off the autoKAP controller, pointed the camera straight down, and ran a CHDK script that triggered the shutter every six seconds. I walked the kite along the entire transect of five plots trying to get vertical “aerial” photos of each plot. When I was done, I reeled the kite in lower and took some closer photos of some of the plots. These vertical photos do not stitch together very well in standard stitching programs, so I aligned them by hand in Photoshop, overlapping and stretching each image to match its neighbors and the grid of GPS points of the plot corners (the flagged corners are visible in the photos). The goal is to create an orthophoto which is distortion free and can serve as a map. I didn’t have adequate GPS or other control points, nor the expensive software (PhotoScan) required to do a good job of this. I have coverage of all five plots, but so far I have only aligned images for three of them. The resolution is not as good as it could be because I did not use my best camera, the lens was at its widest zoom setting, and the A590 was not focused at infinity as it should have been for the higher shots, but the mosaic image might be a useful documentation of the plots. And it was good practice, so the next time I do this it will be considered science.

Here is the orthophoto mosaic from gigapan.org. (see it at gigapan.org)

← Giant Mountain
Return to the Nubble →