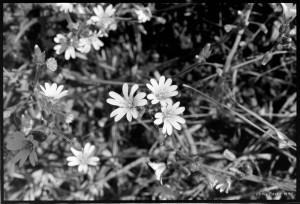 A mouse eared chickweed at Soldiers Delight. I don’t know which species this is. Spring 1975.

There are portraits of more than a dozen species of plant among my old negatives of Soldiers Delight. Most of these are characteristic plants of the barrens, like post oak, blue stem, and moss phlox. A few photos are of plants that are uncommon in Maryland except on serpentine. I don’t know these plants well enough to be sure of the identification, and some might be impossible to indentify just from photos. I photographed these between 1973 and 1975 before I paid very close attention to plant names, but I must have been aware that certain species were special at Soldiers Delight.

I think there is only one plant species in eastern North America which grows soley on serpentine, the Octoraro Creek chickweed (Cerastium arvense L. var. villosissimum (Muhl. ex Darl.) Hollick & Britt., also known as Cerastium velutinum Rafinesque var. villossissimum (Pennell)). It grows on one slope in the State Line Barrens in Pennsylvania. Another similar rare chickweed grows nearby but also grows on non-serpentine soil. Then there are a few more common species of Cerastium. The Octoraro Creek chickweed is on some lists for Soldiers Delight (e.g., here), so there must still be some disagreement about how to identify or classify these chickweeds. I will have to find out what Marylanders think about Soldiers Delight’s chickweeds. I don’t have any idea which one I photographed in 1975. 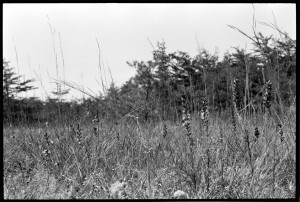 This looks like grass-leaved blazing star, but I’m not sure. Fall 1974. 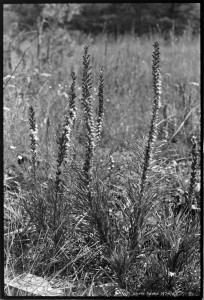 This looks like spiked blazing star, but I’m not sure. Fall 1974.

There are also multiple species of blazing star in Maryland, including a rare one. The spiked blazing-star (Liatris spicata (L.) Willd.) is widespread in eastern North America, but in Maryland it might grow only at Soldiers Delight. A rarer one, the grass-leaf blazing-star (Liatris graminifolia Willd.) might also grow at Soldiers Delight. It’s possible that I photographed both in 1974, but I can’t tell from the photos.

The fringed gentian (Gentianopsis crinita (Froelich) Ma) was once Soldiers Delight’s most famous rare plant. They are native throughout eastern North America, but in Maryland now grow only in Soldiers Delight. This has less to do with serpentine soil than with undisturbed sunny habitats along streams. I remember when they were easy to find along a few streams in Soldiers Delight, but they have almost disappeared in the last few decades.

I never took a photo of the new famous rare plant at Soldiers Delight, the sand plain gerardia (Agalinis acuta Pennell). The sand plains it once inhabited along the east coast have been disturbed enough that Soldiers Delight now supports its biggest population. It is a federally endangered species, and the burning and clearing might be encouraging it in the open serpentine grasslands. Maybe I will get to photograph it soon.