Universities take a dim view of spending two decades to finish a dissertation, so mine included only approaches 1 and 2 above. Time waits for no physiographic ecologist, and it’s been more than 25 years since I established the study sites. Advanced age has its drawbacks, but at least approach number 3 is now an option.

I described the changes that have actually taken place in the 28 years since I established plots at my youngest study site (Site 1) in a previous post. When I took photos of plots at that site last month it had been out from under the ice for 50 years. My second youngest site (Site 2) was exposed in about 1944 and I took photos of those plots in 1995 when the surface was about 51 years old. Measurement data from the plots will provide a robust test, but comparing the photos is my first opportunity to use approach number 3. In this case the photos are all we need to learn that the chronosequence comes up short. 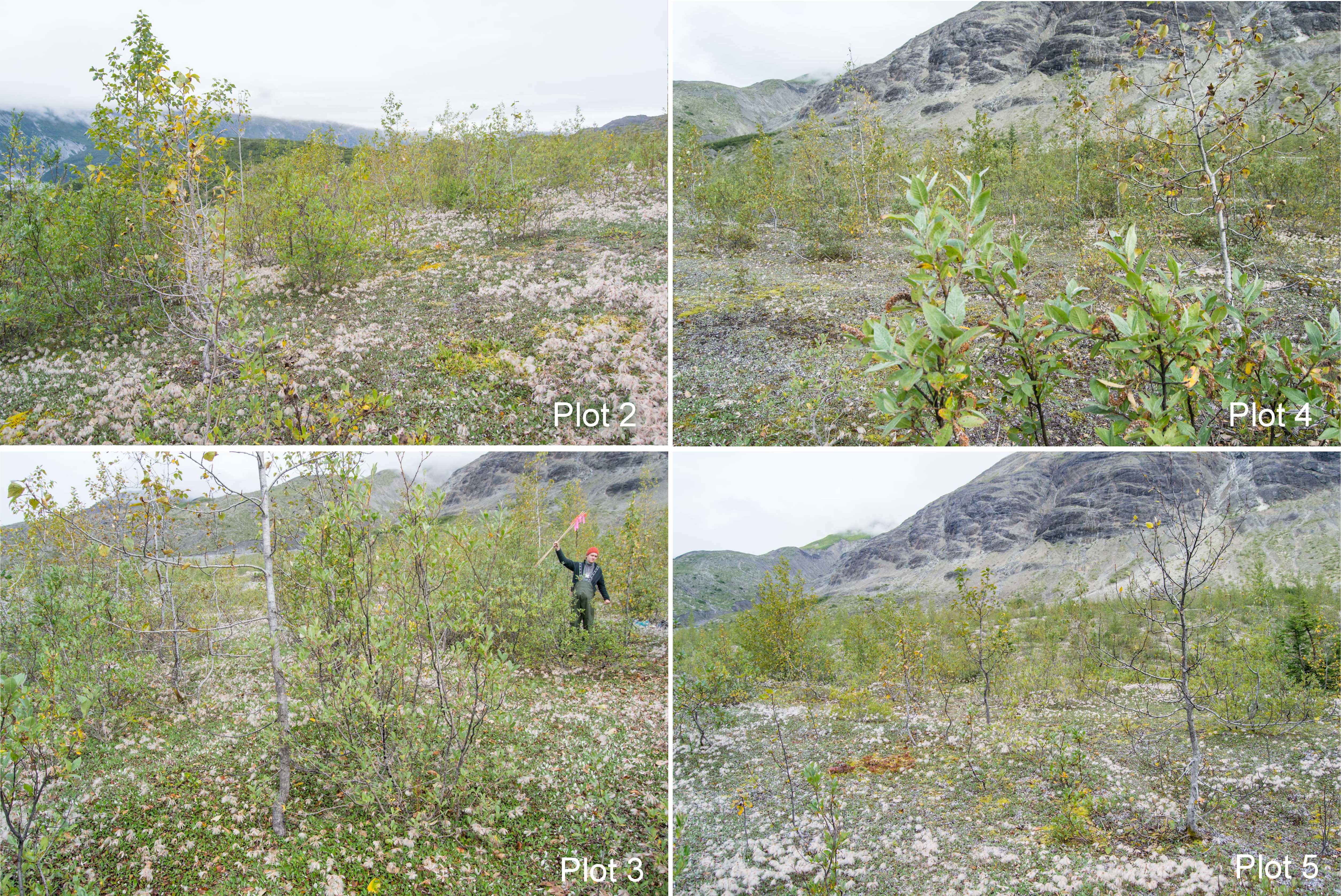 Four examples of the 2018 vegetation in my study plots on a surface that is 50 years old (Site 1, my youngest study site which was ice-free in 1968). In this part of Glacier Bay, five decades produced a carpet of Dryas with scattered willows and young cottonwood trees. Small Sitka alders (7 total) were found in 2 of the 5 plots.

One might expect the photos taken in 1995 at my second youngest site would be similar to the photos above. In 1995, the site below was about the same age as site above was this year. 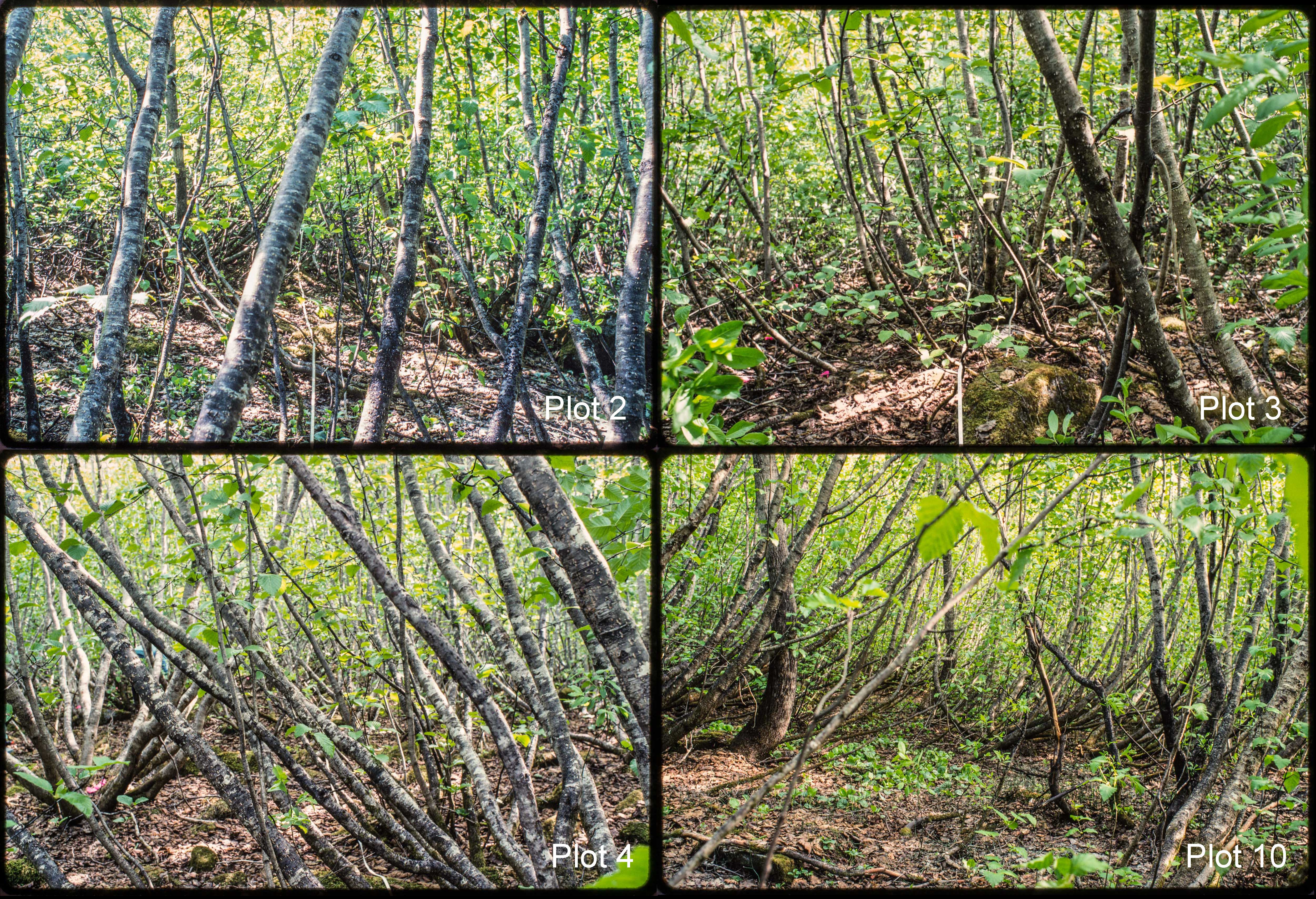 Four examples of the 1995 vegetation in my study plots on a surface that was 51 years old (Site 2, my second youngest study site which was ice-free in 1944). The six other plots at this site look just like these. In this part of Glacier Bay, five decades produced a dense shrub thicket of Sitka alder with scattered cottonwood trees. Almost all of the shrub stems are alder. Kodachromes taken 5/24/1995.

The eight photos above are of post-glacial surfaces that were about the same age when photographed. This is a dramatic failure of the chronosequence. Thirty years ago it would have been a mistake to use Site 2 to predict what Site 1 would look like in 30 years, and a mistake to use Site 1 to imagine what Site 2 looked like in the past. The failure is more severe when the ecological differences between the two sites are considered. In 1995, Sitka alder had been fixing atmospheric nitrogen (N) at Site 2 for a couple of decades. Alder fixes N rapidly compared to Dryas or any other plant at the sites, so the difference in N available for plant growth is probably substantial. These two sites could be headed in very different ecological directions.

Here are some hypotheses which might explain this result.

There is some good evidence to support the seed rain hypothesis. I will present that case in a new post. 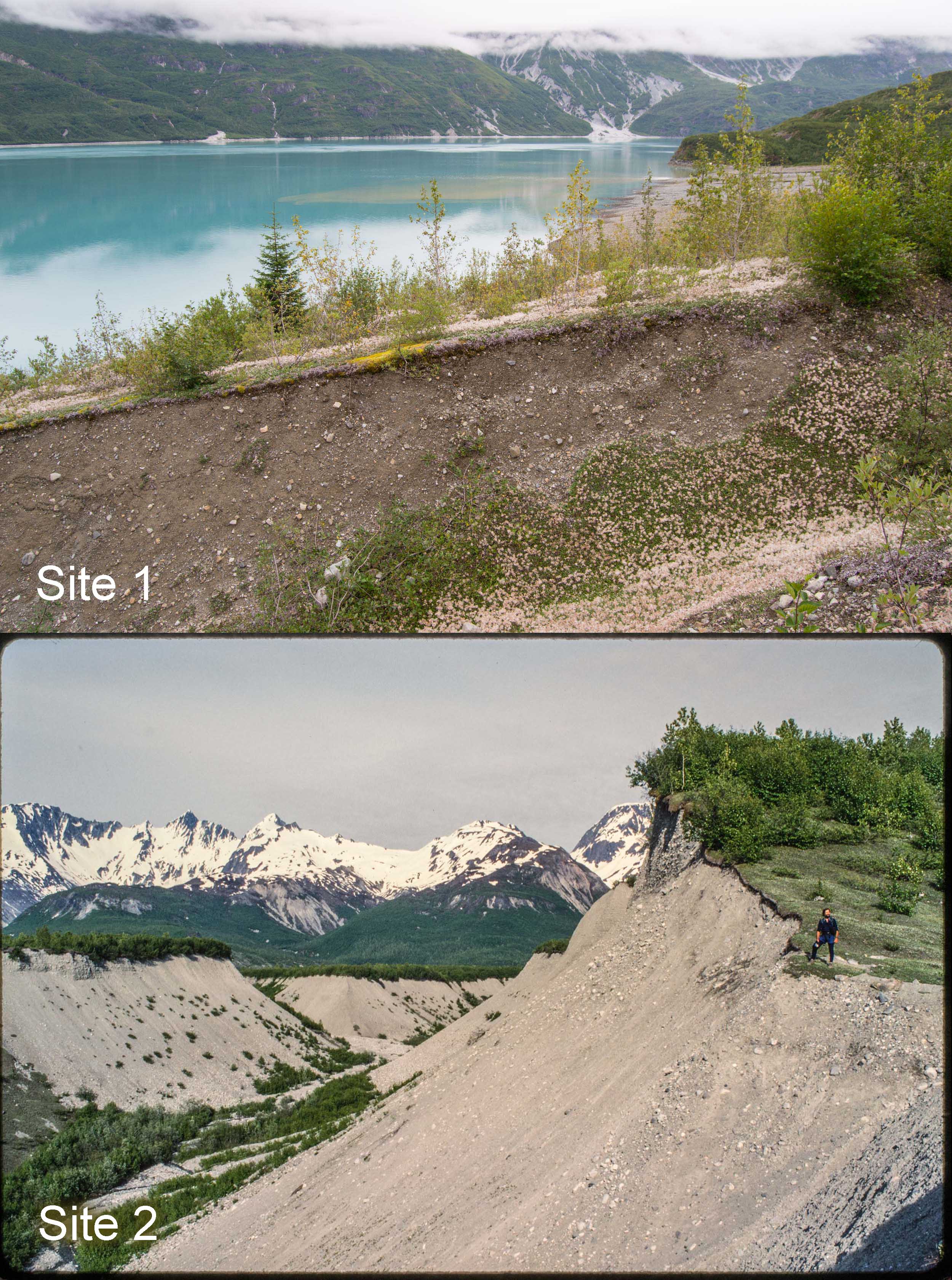 The soils at both Sites 1 and 2 are formed in deep deposits of outwash and till. There is no reason to suspect that soil properties are responsible for the dramatic differences in vegetation development between the two sites. Top: 8/25/2018. Bottom: Kodachrome from 5/22/1995.