I have hypothesized that alder is scarce at this young site because sources of alder seed were distant. In the absence of alder seeds, Dryas, willow, and cottonwood have dominated for the last three decades. But during those decades seeds from the scattered alders at the site could have spread widely and established a nearly continuous alder thicket. The fact that alder is still scarce is not consistent with my hypothesis that lack of seeds explains alder’s meager presence.

Lone Sitka alder near Plot 5 at Site 1 in 1995. There were already three small seedling alders near this shrub, but almost no others near my study plots. Kodachrome, May 28, 1995 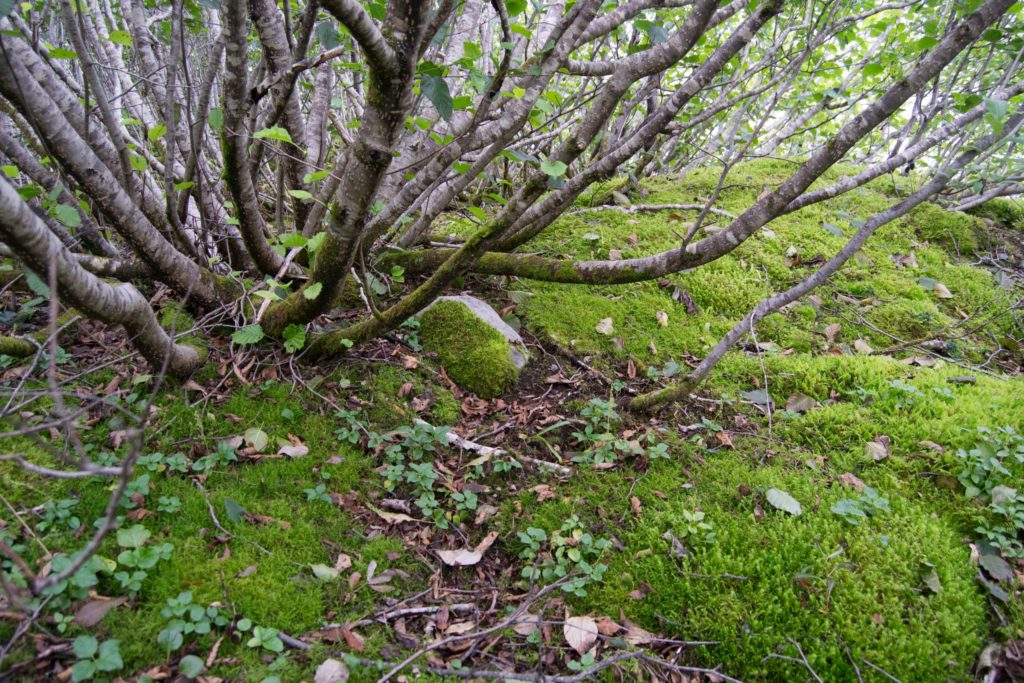 The same alder shrub as above in 2018. Note the same rock at the base of the shrub. This alder is part of an island thicket of alders 45 m across (see below). Shade and alder litter has favored moss over Dryas. Continued alder litterfall will eventually kill most mosses. 8/25/2018 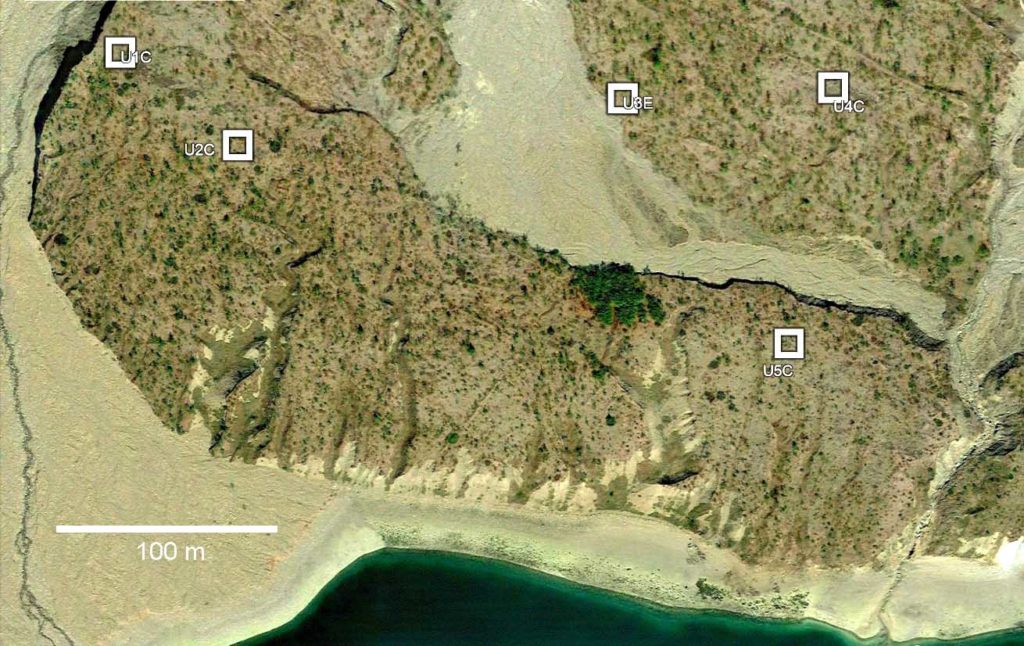 Study plots at Site 1. To the left of Plot 5 (U5C) is the 45 m long thicket of pure alder which spread from a single early-establishing plant (photos above). Google Earth image dated May 15, 2017 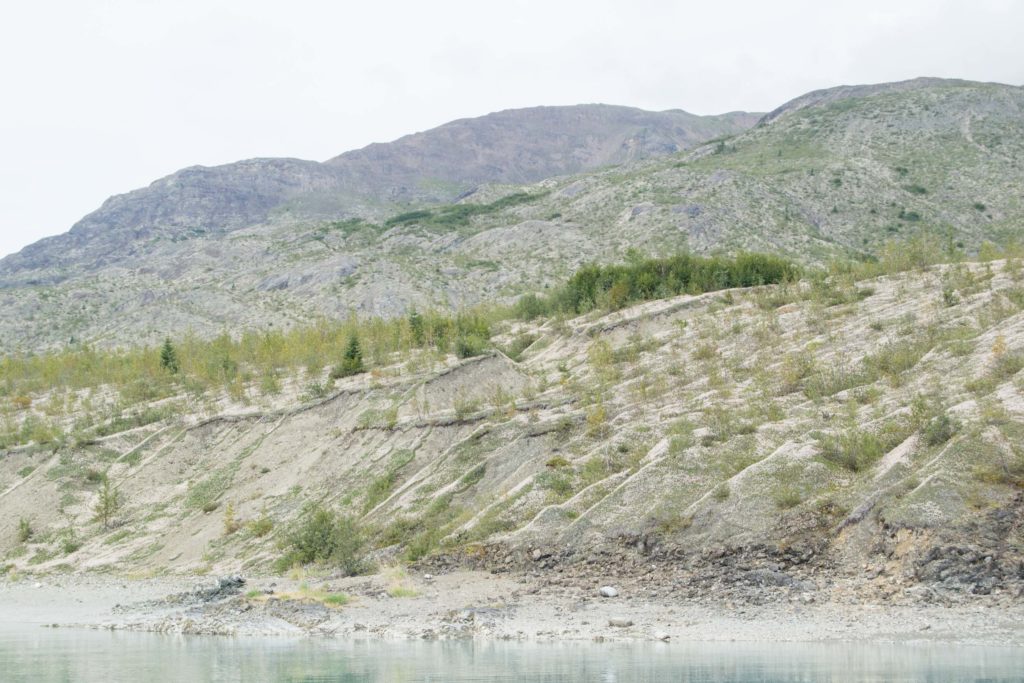 The 45 m wide alder island near Plot 5 at Site 1. Three Sitka spruce trees are visible, but there are very few scattered alders on this bench which is carpeted with Dryas. Another large alder island is on the ridge in the distance. August 26, 2018

Maybe this site is just not conducive to the growth and spread of alder. But there is no evidence that soil properties or climate can explain alder’s poor performance. So maybe timing is important. Although alder seeds were apparently scarce for this site’s first 20 years, they have probably been abundant during the last three decades. But by that time another plant community was present. Maybe the Dryas that covers more than 90% of the study plots prevents alder seeds from germinating or establishing. Maybe if abundant alder seeds arrive early they can establish and form a dense shrub thicket, but if they arrive after Dryas covers the ground, they do poorly. 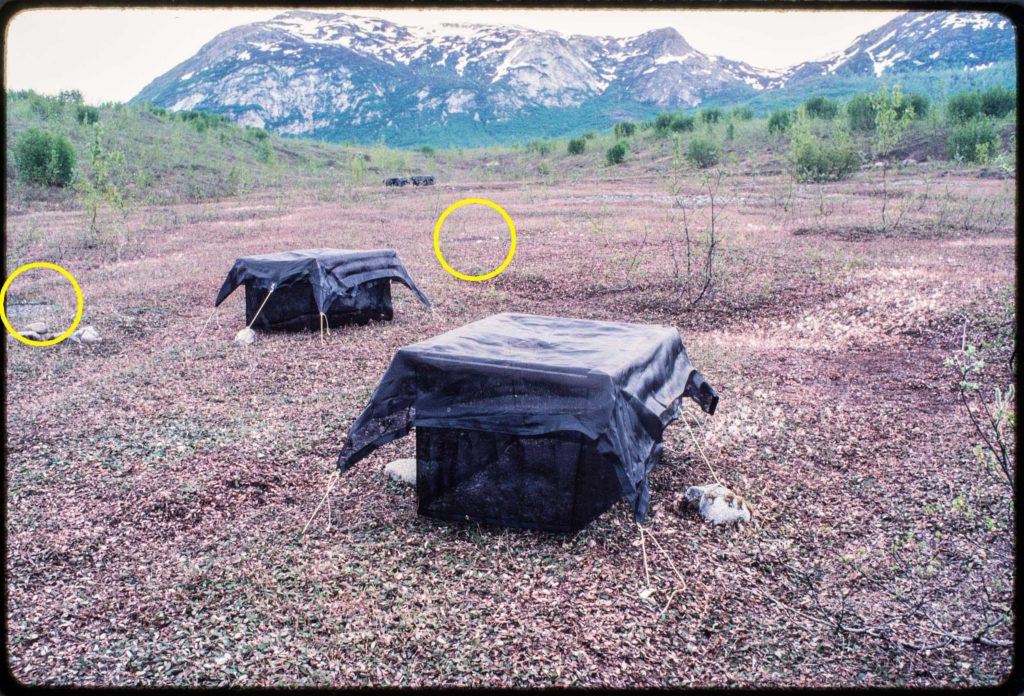 In 1987, Terry Chapin and Lars Walker initiated a series of experiments to learn how species interacted with each other in the early decades of vegetation development in Muir Inlet. One of the many hypotheses they tested was that the carpet of Dryas inhibited the germination or establishment of alder. Alder seeds were planted in four vegetation types (uncolonized young soil, Dryas carpet, alder thicket, and spruce forest) and also in plots at those sites where all plants and litter were removed to expose bare soil. Alder seeds germinated and grew well for two years at the youngest site on either the undisturbed soil or where any moss or black crust was removed. However, almost all alder seeds failed to germinate when planted in Dryas, and did significantly better when the Dryas was removed. 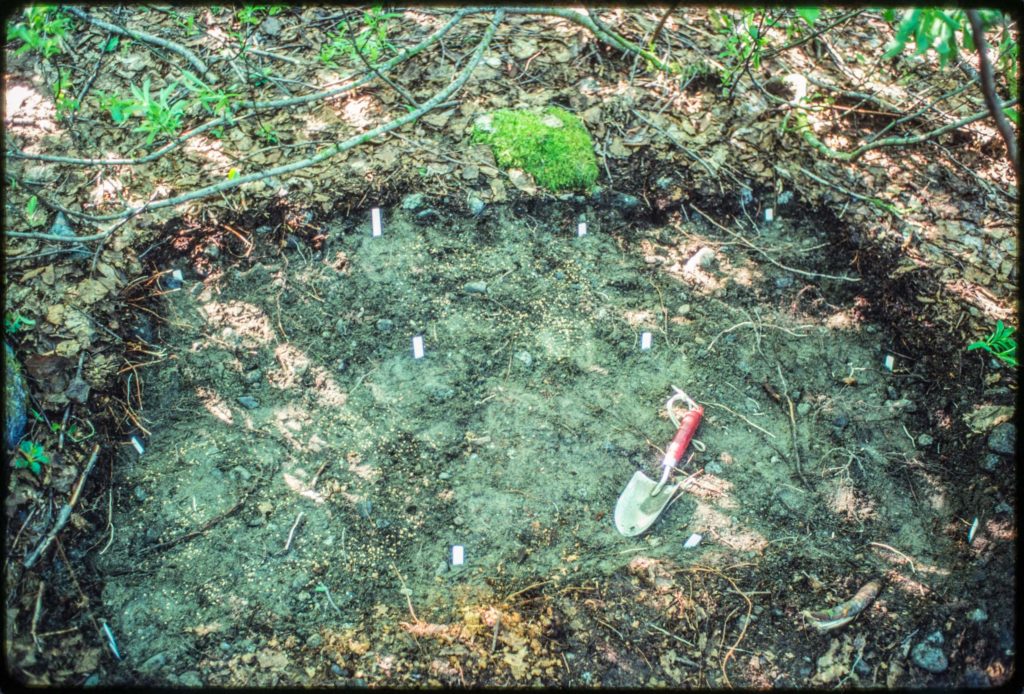 A seed sowing plot in the Alder stage. Alder (and spruce ) seeds were sown on the litter-covered ground and also in these plots where plants and organic material were removed. Kodachrome, May 1988

Terry’s experimental results are consistent with the idea that a delayed arrival of alder seeds at Site 1 allowed Dryas to establish and then prevent the type of alder invasion that happened at older sites in Muir Inlet. The seeds produced by the few pioneering alder shrubs (and later by their rare offspring) encountered a hostile environment for establishment, and the early established Dryas, willow, and cottonwood are having their decades in the sun.

Terry and Lewis measure photosynthetic response of spruce seedlings with a LI-COR gas analyzer in 1988. This site is the same age as my Site 1 but on the south side of Muir Inlet where alder seeds arrived quickly. No Dryas is visible in this photo, but alder seedlings are abundant (circles). Today this slope is a dense alder thicket. Riggs Glacier is in the background. Kodachrome, July 1988

If this is what is happening, it’s another example of how early colonizing plants absolutely do not “pave the way” for later plants. When this idea of facilitation is carefully tested, the result usually suggests that established plant communities compete strongly with potential invaders, in other words do the exact opposite of facilitation. But that’s another story.