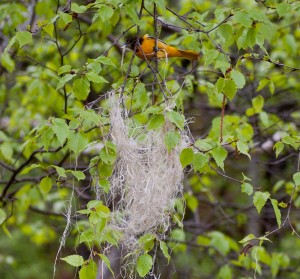 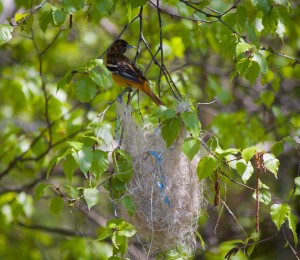 May 12, 2012. The nest had taken shape, and a couple strands from a blue plastic tarp had been added for extra durability. 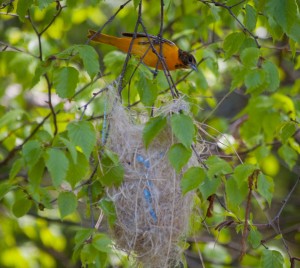 Here is a two minute video of mama weaving the nest on May 11 and 12.

Yesterday, Galen noticed a scruffy little bird perched on a patio bench. We watched “Elroy” try unsuccessfully to fly back up into the tree. Undaunted by his first contact with the ground (this is a cat free zone), he started to climb-hop up the trunk, somehow choosing the correct one from several similar birches along the patio. His sibling “Jenkins” then emerged and hopped around on the branches above the nest. Wriggling in the nest indicated that “Herschel” was still inside. Galen kept track of the fledglings for a while and took some photos, but nature happens slowly for a busy 13 year old, and we’re not sure where they all ended up that day. 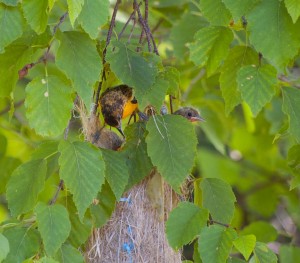 June 13, 2012. A month after the nest was finished, Galen made the first sighting of a fledgling. This is 'Jenkins' on the right, looking for 'Elroy' who had already taken the plunge. 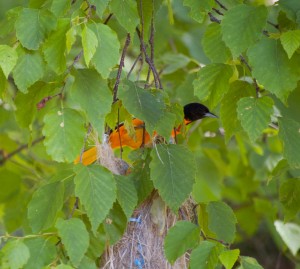 June 13, 2012. Dad never helped building the nest, but was around some when the young were trying to leave.

The image below is an animated GIF. Click it to play.

Making a new oriole, one green bug at a time. Click to play animation.

This morning at 8:30, an “Elroy” lookalike emerged from the nest and climbed about 15 feet above it. The nest was wiggling, so at least one sibling was still in there. Maybe the parents guided them back to the nest for the night. I took a few photos, but sometimes nature moves slowly for old men too. I don’t know what adventures Elroy, Jenkins, and Herschel enjoyed today. 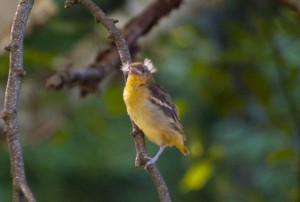 June 14, 2012. At least two young were still in the nest this morning, and this one climbed 15 feet above the nest before I lost track of it.