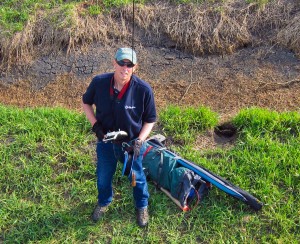 Launching the rig for a two-hour flight. Note the huge pack full of all the things that I did not use.

Everything tested well before launch, and I was happy with the decision to move the ISO from 80 to 200 and slow the shutter speed from 1/800 to 1/640 second (Tv) to account for the low sun and blackened ground. Exposure compensation was -1/3, focus was locked on infinity, and IS was off [Update: now I think image stabilization might have been ON]. The camera was firing on command, the servos were responding, so I let out line. I walked six parallel transects during the next 1.5 hours, stopping every minute or so to take one to three shots. I also stopped a few times to shoot a few dozen oblique shots with the hope that some might stitch into panoramas. The camera was a few hundred feet up so I could not see which way it was pointing, and I had no feedback from the rig, so I was just winging it with the controls on the RC aircraft transmitter. I probably walked two miles and took 350 photos. Or so I thought.

The MapKnitter image of 29 photos aligned on top of a Google Earth image. A nicer view of this is here: http://mapknitter.org/tms/lemon-fair-burn/openlayers.html

When I was done, I walked the kite partway back to the truck through the pastures and hayfields taking more vertical, and some oblique shots. It was 7:30 PM when I pulled down the kite, and I was pleased to see that the lens on the S95 was still extended, meaning it had not run out of battery and turned itself off. But it WAS off, and it had been off for an hour and a half. I still don’t know why it stopped capturing images after the first 93, but the fact that the lens was still extended must be a clue. I will have to do some testing. But I guess that with wind that good, and at such an easy flying site, I should have had two cameras on the rig.

Three of the oblique photos stitched into a panorama looking north from the mapping site. Snake Mountain is in the distance at center.

Halfway through the next day, finally recovering from the exhaustion of walking six miles with a big pack (3 kites, two rigs, 6 cameras, spare spars, doggy anchor, etc), plus five hours of garden rototilling, I laughed out loud at the realization of my folly. Somehow it did not seem like a wasted 90 minutes repeatedly pushing the joystick that sent a 2.4 GHz radio pulse into the unresponsive void. I will figure out what went wrong, and avoid it next time. I was able to align 29 of the vertical images and see the general pattern of part of the burn. I also got to walk through the burn and see how the fire finds the dry thatch, how it jumps a hundred feet to spot a new fire, and how it kills frogs. I learned that if I come back with an infrared camera and make an NDVI map of the same area, I might learn how much burning increases productivity (not that the farmer doesn’t already know that). I learned that I probably should have let out all 1000 feet of line and captured a wider view of the burn, and that it took forever to align 29 photos in MapKnitter, and that I’m glad I didn’t have 200. More importantly, woodcocks were PEENTing and twittering on the way back in the twilight, and I got to the truck before dark.