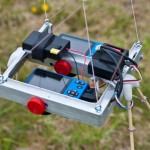 The timer was an AuRiCo KAP controller standing in for the MK111 timer that shipped with the PLOTS kit and is still being engineered for flight readiness. The AuRiCo triggered the two cameras simultaneously so when I made a five photo panorama I actually made two — one in visible light and one in near infrared.

I aligned (rectified) each visible/NIR pair of photos in Photoshop, and then used GIMP to replace the blue channel in the regular image with the NIR information from the infrared camera to make an NRG image. Then I used GIMP’s functions which add, subtract, or divide the color values to compute NDVI (Normalized Difference 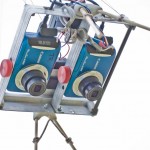 The alignment of the cameras is still being adjusted. The wrist straps of both cameras are used as lanyards.

Vegetation Index) for each pixel. I eventually had five versions of each photo: normal RGB, near infrared, false color infrared (NRG), grayscale NDVI, and false color NDVI. I used Microsoft ICE to stitch together a panorama for each of these versions and combined them into one big poster in Photoshop which was 170 megapixels, big enough to upload to Gigapan.com. It is embedded below. The snapshots are four pairs of matched closeups of the normal panorama (top panel) and the false color NDVI (bottom panel). Click them in order to see how the normal image compares to the NDVI representation of where photosynthesis is most active. The hottest colors (yellow to red) represent the highest values of NDVI where the most photosynthetically active biomass should be present. A better view with full description and captions for each snapshot is at Gigapan.com. 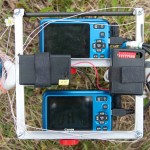 Three AAA batteries (box on left) power the AuRiCo (box on right). The AuRiCo output is split into two USB cables to the cameras.

The corners of the frame are the attachment points of a Picavet suspension system.

There is more about the process for doing all of this at the expanding wiki at http://publiclaboratory.org/wiki/dual-camera-kit-guide

Camera alignment: The alignment is close, so the two images are offset by about 60 pixels (both x and y). Alignment is important because it makes rectifying the images more productive — each pair of rectified images yields more final image when the stacked images coincide.

Focus: The NIR camera has a harder time finding the correct focus. I tried both Normal and Infinity focus mode. Both seem to be automatic focus modes, but Infinity does not bother to search closer than about 10 feet. That is an important advantage, but it still results in the camera continuing to search for focus when it is time to shoot. In some situations this could cause the A495 to refuse to shoot and miss a photo. Using CHDK to fire both cameras simultaneously after a timer signals the USB port eliminates that problem because the camera shoots even if it is displaying an error due to failure to focus. So failure to focus in time will not cause missed photos, but the NIR camera will probably produce more out-of-focus shots than the normal camera. A camera with a true manual focus mode would be preferable. Although CHDK offers no menu control to lock focus, it does offer focus control via scripts. This will have to be investigated.

Stitching: I used Microsoft ICE to do the stitching. The NIR photos from the modified A495 stitch together into panoramas about as well as normal photos. The other images, all of which start with one photo aligned on top of another, are harder for stitching programs to match because adjacent images might have been aligned slightly differently. The false color NDVI is very hard to stitch because it has much less detail (nearby pixels with similar values are all assigned the same color which obscures fine detail). I had to do much of that stitching manually in Photoshop.