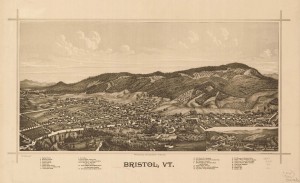 You can view a high resolution version here: http://fastie.net/wp-content/uploads/2012/12/Bristol1889.jpg

I had been thinking about this old image, but I did not examine it before I flew a camera under a nine foot delta kite from the Mt. Abe High School in October, and the resulting panorama is from a different vantage. But now I know where the kite has to be to repeat the old view, and I think it will be possible to do it. I will need the reel with 1500 feet of line, and a more reliable wind than I had last time (disaster was averted by a lucky zephyr that stopped the fall into a poplar).

The best exploring of the panorama below is here.
.

.
A lot of trees have been processed in Bristol. Huge stacks of forest products are stored on the floodplain in both the 1889 and 2012 views.
.

The stacks by the New Haven River appear to be of processed lumber in 1889 and of raw logs in 2012.

.
Notes:
The Canon S95 captured 562 images during the 57 minute kite flight. Fourteen of the photos were stitched together in Microsoft ICE and two more were added in Photoshop. These 16 photos were taken within a three minute period along with 44 other photos.
.
9′ Levitation Delta kite
RC radio control of tilt, pan, and shoot
Canon Powershot S95
ISO 80
1/800 second (Tv)
-2/3 exposure compensation
28mm (eq)
manual focus on infinity
14 photos stitched in Microsoft ICE, 2 more added in Photoshop